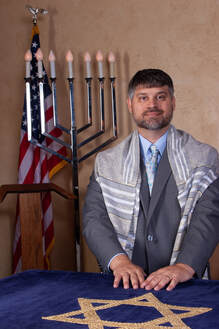 I arrived in Vero to serve Temple Beth Shalom in the summer of 2002 full of excitement and enthusiasm. Since our arrival, my wife Jill and I and our two daughters and son, have happily been making Vero our home.  While we are new to Vero, we are not new Florida residents.  Jill was born in Florida and I moved here with my family when I was twelve.  I went to junior high and high school in Tampa and then studied sociology, education and Jewish history and culture at the University of Florida.
While I lived in a very large Jewish community in Tampa, I also have extensive experience living and working with small Jewish communities in small towns.  I was born and raised in Jackson, Mississippi, where my father was one of 7 full time rabbis in the state at the time and I was one of six in my religious school class.  First as a college student and then as a student at Hebrew Union College, I served small congregations in Gainesville, Florida, Billings, Montana, Columbus, Mississippi and Marion, Ohio.  Additionally, through my rabbinical thesis research (entitled: THE CEMETERY IN A COMMUNITY’S LIFE, DEATH AND AFTERLIFE: A Study of the Cemeteries of Extinct and Nearly Dissolved Jewish Communities in Mississippi and Louisiana), I gained important insight into the ebb and flow, challenges and treasures of small Jewish communities.
As I have learned, small does not mean lacking in any way shape or form.  At Temple Beth Shalom we pride ourselves on creating rich Jewish experiences; whether in worship, study, and acts of Tzedakah or just getting together to have some fun.  We endeavor to provide many pathways for every person to live out and discover their own meaningful expression of Judaism as part of our community.
Please join us as we celebrate holy moments, wrestle with God, seek to use the wisdom of our four thousand year old tradition to understand, appreciate, and make the most of our modern life.
B’shalom,
Rabbi Michael Birnholz 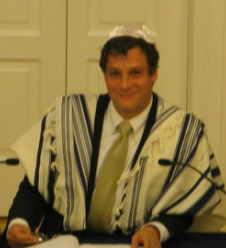 Rabbi Matthew Durbin was born and raised in Toronto, Canada, and was an active member of his home congregation of Holy Blossom Temple. After completing an undergraduate degree (B.A. Honours) from York University in Toronto in Anthropology, he embarked on his journey towards the rabbinate preparing at the Leo Baeck College in London, England where he was awarded a Masters of Hebrew and Jewish Studies as well as rabbinic ordination in 2008. During his third year in rabbinical abroad in Jerusalem, he met his wife, Rose, while she was training for the rabbinate in her first year at HUC-JIR in Israel. His rabbinic thesis: The Development of Tikkun Olam and its implications on the Modern World, focused on examining the term Tikkun Olam in its historical and Early Rabbinic understanding toward our modern day interpretation of the term as it relates to social justice and action.
He and his wife have three beautiful and energetic daughters who are a delight and keep them on their toes. Rabbi Durbin was formerly the spiritual leader for Temple Beth El, a Reform congregation located in the Adirondack Mountains of Upstate NY, for six years where he strengthened the community, formed a strong sense of Jewish identity within the congregation and inspired members of the community to become more active and involved in congregational life. He brings with him great energy and excitement for Judaism and a strong commitment to learning and education, as well as a deep passion to interact and form relationships amongst the community. He is very happy to call Temple Beit HaYam in Stuart FL home.

Known to many as Cantor B- Rabbi Bruce Benson received S’micha  from the Rabbinical Seminary in New York and is now ordained not only as a Rabbi, but also as a Cantor having been Ordained by Hebrew Union College in 1978.
His background is quite wide ranging and includes pinnacle moments such as: having served as 2nd VP of NFTY, receiving a GRAMMY Nomination for a liturgical service written and recorded with KENNYG, having been published in a number of periodicals on issues relating to contemporary Jewish Life, has founded several Jewish Institutions, as well as many other benchmarks.
His song, “The Healing Prayer” from his work the Rock Service, was recorded with Clarence Clemons of Bruce Springsteen’s band and can be found on You tube having been heard over 260,000 times.
Having founded and served a number of Congregations as Cantor and/or Spiritual Leader, he has taken the next logical step and completed his studies to reach this plateau and has recently been elected to serve as the Rabbi of Temple Beth El Israel of Port Saint Lucie.